The Xtext team proudly announces the availability of the first release candidate for the upcoming 2.14 release.

The new release comes with an impressive list of new features! We will now document them in the release notes for Xtext and Xtend, and in the Xtext user manual. Make sure to visit these once in a while when you try the new features. We are going to update the docs regularly.

Xtext 2.14 has been made ready for Java 9 and Java 10! Especially Java 9 Modules caused major headaches, like for other projects that we rely on as JDT, Gradle and Tycho, too. This is also a great opportunity to check out Java 10 yourself.

Also Xtext 2.14 is fully compatible with your existing languages. To best employ the new features after the upgrade, we recommend to use the Xtext Project Wizard to create new projects with an up-to-date configuration and compare the setup with your existing language. For example, for Java 10 support we had to upgrade the ASM library to version 6.1.1 and so do you. In the next weeks we will work on a more thorough migration guide as part of the final release notes.

Xtext 2.14 supports the brand new Code Mining API from Eclipse Photon. To give it a try, you’ll need Eclipse Photon. You should use the latest Eclipse 4.8 Integration Build. The Domainmodel Example DSL contains a sample implementation for Code Minings and serves as a blueprint if you plan to implement your own. As the Code Mining implementation in Eclipse is still under development, its inventor Angelo Zerr is happy to get your feedback, too. Fame and fortune is to come if you report bugs to the Platform Text component in time so they can be fixed for the Photon release.

The 2.14 release contains an updated testing infrastructure. The JUnit support has been extended so you can execute tests written with JUnit 5. The Xtext Project Wizard allows you now to select JUnit 5 for testing support and will produce a sample parser test and add the required dependencies.

We encourage you to check out Xtext 2.14.0.RC1 now. Also report issues and take a look at the bugfix lists for changes that have not been highlighted here. We have spent endless hours to bring you the best Xtext release and love to hear from you what you think about it!

Holger Schill, Karsten Thoms, Christian Dietrich, Arne Deutsch and Sebastian Zarnekow are driving Xtext activities at itemis. They have many years of experience in language engineering and Open Source development and are actively contributing to the development of the Xtext framework. They gather their inspiration from customer projects which use Xtext in a large scale and variety, where they are actively involved in the development as well as offering professional support services. 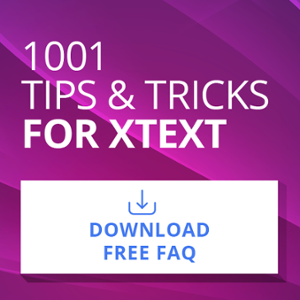