In the recent blog post by Andre Stolpp, we explained the hard- and software architecture of our itemis Robocar project. For setting up Robocar, development was done directly on Raspberry PI. Although it is very comfortable to work on that device, it also has a few limitations:

There are a few approaches that are available to mitigate these issues:

Setting up cross-compilation toolchains can be cumbersome tasks. We chose an approach with Docker for several use cases:

We are using Docker to set up a native ARM32v7 toolchain and avoid messing with cross-compilation environments. But how does this work, since notebooks and PCs are not based on the ARM architecture and thus cannot execute ARM code natively?

There is a very nice feature in Docker for Windows (it is not in the Unix version of Docker) that allows you to execute native ARM code: Docker for Windows comes bundled with QEMU. If Docker detects that a container is based on ARM code, it is executed within QEMU. This brings a lot of advantages (but also has some limits, as discussed below).

To define the contents of the container, we need a Dockerfile. Ours looks like this:

This Dockerfile sets up a Debian Stretch, installs a lot of required packages. Amongst others, it clones, compiles and installs OpenCV. It also creates a directory called /xbuild, which we will use to compile the code.

Our source code is on the host machine, i.e., the Windows machine, so we need to start the container that mounts /xbuild as a volume to the location of the project.

This gives us an interactive shell in the container. If we mount the correct source directory, we can use cmake and make to build an executable that could be run on the Raspberry.

But of course we would also like to use the Docker-built binaries to check and test our code. Since we are within the ARM32v7 Docker, we can simply run our binaries. But there is one caveat: Running within Docker does not provide the same hardware obviously. So we have at least three issues:

The solution to this problem is of course abstraction. We should abstract the real hardware. So, our code will be working with an abstract AbstractJoystick, and then we are going to instantiate two different implementations, based on a command line switch.

In addition, the image acquisition can be chosen as to read from a camera or from a video file (Docker version). The actuators are either actually controlled or replaced by a dummy class. 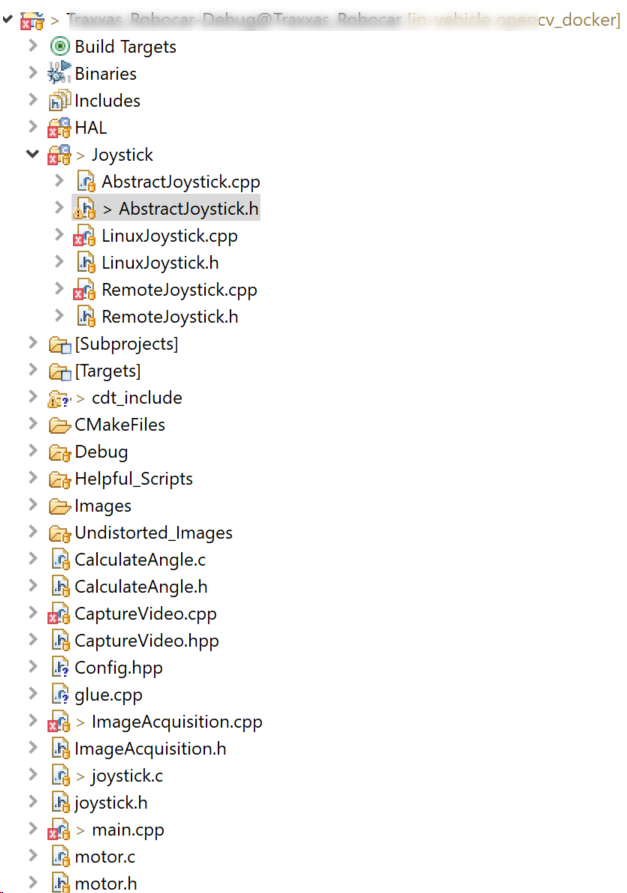 This makes the files visible in CDT in the project explorer. Using the project properties, we can tell the CDT indexer where to find the files. Sometimes it does not find includes in subdirectories, so we might need to add them manually. Of course this needs to be repeated after installing additional includes. 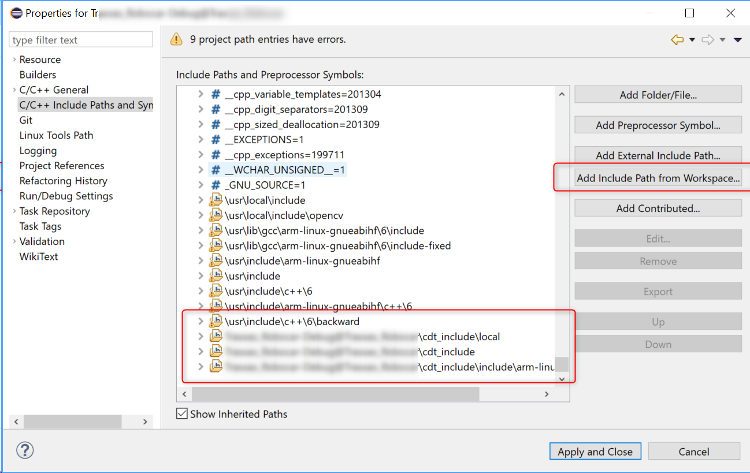 We can then start the build inside Docker from the standard CDT build system by adding a new build target and using a trick on the dialog:

Note that in the text field labelled “Build target”, we set the name of the command that we want to execute on Docker. “Build target” is always appended to “Build command”. We can now start the build of the target from CDT, and Eclipse will invoke Docker to compile the code.

It would of course been also very convenient to actually be able to debug the code running in the Docker container. Gdb supports remote code debugging on other machines. However, the Docker QEmu and debugging don’t go well together. It is not possible to start gdb in the container, because QEmu does not support the ptrace system call. If you are using QEmu from the command line, there are workarounds, however, we could not get this running from Docker.