Developing embedded devices, especially for IoT applications, can be a very complex task and requires a lot of knowledge. In the last blog post of my colleague Thomas Kutz we introduced Eclipse Mita, a new programming language designed for developing embedded IoT devices. It comes with a concise syntax based on event-driven paradigms and abstracts from the underlying hardware.

Its two level architecture (application logic vs. platform specifics) allows to write easy-to-read application code without diving into hardware specifics. However, Eclipse Mita currently only supports the XDK platform as it was originally developed in the scope of Bosch’s XDK device.

In my master thesis I investigated how additional platforms can be integrated with Eclipse Mita and furthermore I implemented a prototype based on the popular Arduino Uno platform.

The prototype comes with support for time-depending events, buttons and LEDs. Additional features can be added later on, however, in this blog I want to show what’s possible with this extension.

Eclipse Mita comes with a two level architecture, thus separating application logic from hardware specifics as much as possible. In order to integrate a new platform, one needs to contribute a platform definition as well as a bunch of platform specific code generators, the greenish parts of the picture below. 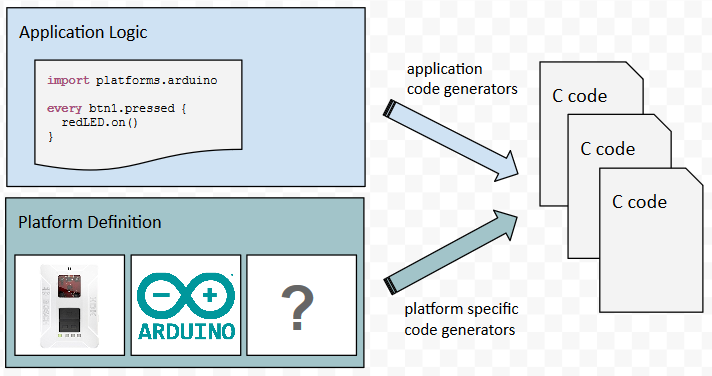 The platform definition specifies which sensors and connectivity channels are available. In general, it is divided into three parts:


There are several options to specify the platform. This is a simple example to demonstrate how it could be done:


Let’s go through it step by step. First, every platform needs to be specified within a package. This can be later imported in any user created Mita application.


After this we can specify the sensor and connectivity types. In this case it is the button as a sensor. A sensor type defines several so-called modalities as well as events. Modalities define the data or state of a sensor; here is_pressed represents the pressed status of our button. However, instead of polling this status in our application code, we want to be informed on a status change via events. For this, we define two different events, the pressed and the released event, which can later on be used within the user programmed application code to define corresponding reactions. Lastly, we need to specify a code generator that implements the hardware specific parts.

To use LEDs, we define a connectivity called LED. It contains a signal with which the LED can be controlled. Supported colors are declared as an enumeration here.


As our platform contains two different buttons, we need to instantiate them like this:


With this definition there are two buttons. Both of them can be used and have their own modalities and events (just like classes and objects, basically).

Last but not least, the platform itself must be declared. The platform defines which components are used, via the keyword has.


With this specification the Arduino platform contains of two buttons, defined as a sensor and the LED defined as a connectivity. The buttons got two events, pressed and released and a modality is_pressed. They can be used within the application code. The LED can be controlled by changing the light_up signal.

Use Arduino platform definition in your own application

The button button_one that we have specified in the platform can be referred to in the application code, especially to its modalities and events, like the event pressed here.

The following example demonstrates what a simple application could look like, for controlling a red LED with two buttons:


This simple example might not be technically sophisticated, but as the supported components expand, the complexity of the application grows. By adding connectivities and sensors like bluetooth, wifi, accelerometers, gyroscopes, writing custom C code becomes time and cost expensive. With generalized and common C code generators a reliable development can be achieved and your development process is extremely accelerated.

Do you think a certain platform should be supported by Eclipse Mita? Feel free to leave a comment or send a mail and let us know!