Today we released YAKINDU Statechart Tools Standard and Professional Edition in version 3.4.0. Among several bug fixes, the 3.4.0 release comes with a pile of new cool features:

The larger the model, the greater the need to quickly search for elements, for example, all states with a given name resp. name pattern, all occurrences of a certain variable etc. This is now possible with the new model search integrated in the Eclipse search dialog: 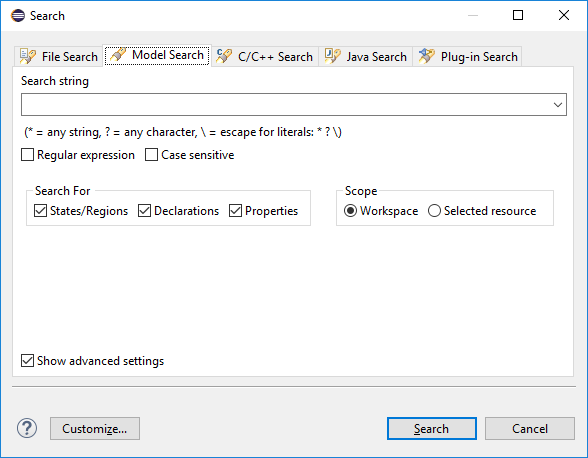 The model search allows you to use regular expressions and to filter for the kind of elements you want to search for. Once the search is performed, its results are listed in the search view where you can quickly navigate to the corresponding statechart elements.

A similar but slightly different use case is to search for all references of an element. You can find this option now in the context menu. The results will be listed in the same view as for the standard model search.

This version of YAKINDU Statechart Tools comes with an SCXML domain made to facilitate generating SCXML files from YAKINDU statecharts. SCXML, short for Statechart XML, is a statechart interchange format based on XML, standardized by the W3C. All states, events, variables and so on are defined in the XML. SCXML relies on external engines to execute the statechart according to the standard, which allows a statechart defined in SCXML to be highly portable. Like other XML based formats, it is only an interchange format and hence not really suitable for direct editing.

YAKINDU Statechart Tools Professional Edition with its SCXML domain allows you to design and verify statecharts exactly according to the SCXML standard. The built-in simulation engine of YAKINDU Statechart Tools Professional Edition was adopted to reflect the execution semantics of SCXML correctly. And of course, the SCTUnit framework takes the SCXML domain into account as well, so you can be sure that the test results reflect the behavior of the SCXML engine of your choice.

To see everything in action we have added an example to our example wizard. This example was taken from the Qt examples and modeled with YAKINDU Statechart Tools. It contains a traffic light statechart which is on-the-fly transformed into an SCXML file. You can edit, simulate and test the statechart as you are used to in YAKINDU. Additionally, the example comes with some Qt code, so you can run it in your Qt environment and see the traffic light in action.

Speaking of our example wizard, we also put some effort here to provide a cleaner, more structured appearance. You should give it a try and get inspired by our increasing amount of examples!

We have adopted our testing framework SCTUnit to also work with C domain statecharts. This means, you can now write unit tests for your C statecharts in SCTUnit, execute them, and also generate GTests, for execution on a build server, for example.

In SCTUnit you can easily mock the environment your state machine is interacting with by raising events or mocking operation results and then verify corresponding state changes or outgoing events. When writing SCTUnit tests for your C statechart you can access all C elements (variables, operations, datastructures) that are also made accessible in your C statechart by the imported header files.

We have added an SCTUnit test suite to our coffee machine example which you can find in our example wizard. Executing the test suite will also reveal our coverage view showing you which states and transitions have been covered by your tests.

Apart from these new features we also worked on many smaller improvements, bug fixes and better performance: