Previously, I presented how to tailor Enterprise Architect (EA) with MDG Technologies to define UML profiles and with add-ins to increase productivity. In this final article, I would like to develop the running example further to generate source code from the EA model. This means to transform the EA model into an Ecore model, the meta model of EMF.

EA offers a code generation facility and a documentation engine allowing one to generate source code and reports. Both can be tailored to produce the desired source code and documents, respectively. However, there are some points against the usage:

Additional arguments are given in the article “Eclipse-based Code Generation for Enterprise Architect Models”.

Solution: Generator Implemented in Any Language Targeting the JVM

The YAKINDU EA-Bridge provides access to the content of an Enterprise Architect model stored as eap-file or within a remote database. It transforms the EA model into a standardized UML 2 model on the fly. Thus, all existing tools which operate on such UML 2 models should be compatible and can be used. This includes, for instance, the tree-based UML editor (see left editor in the screenshot “Eclipse extension to generate an ecore-file from a given eap-file”) and validation capabilities which are, compared to EA’s UML validation, complete and much faster.

Artifact generators operating on UML 2 models (and generally on all EMF-based models) are easy to implement with Xtend or Acceleo, but also any other programming language targeting the JVM can be used.

The screenshot below shows Eclipse with a custom extension that allows the user to generate an ecore Model from an EA model. The transformation is triggered via a context menu item. Once the ecore-file was generated, it might be modified by the user before Java source code is generated with the usual EMF tooling of Eclipse. In addition, validity of the EA model can be checked by calling EMF’s validator directly on the eap file.

Solution: Use Headless Mode To Check a Model by the Artifact Generator

As the checks must be available in the artifact generator, a re-implementation in the add-in for EA should be avoided. We achieve this with a headless mode without any user interface offered by the artifact generator for checking purposes. The add-in can then call the existing functionality, prepare the results, and show them to the user.

The screenshot below shows how the EMF validation can be triggered within EA. The results are shown in window System Output. A double click on an issue selects the related element in the Project Browser window. 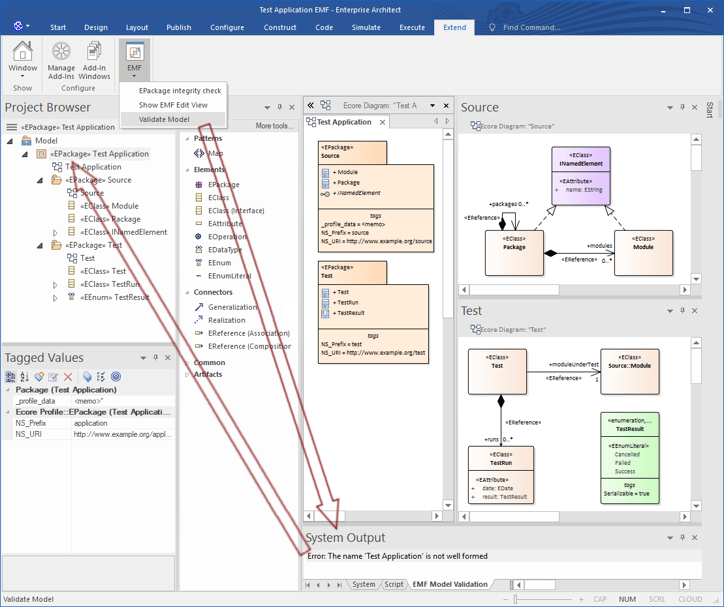 In this article, I discussed how the YAKINDU EA-Bridge can be used to process an EA model in order to implement maintainable artifact generators. Offering a headless mode in addition avoids the need to implement model checks multiple times.