The team around project lead Christian Dietrich has released version 2.18 of Xtext and Xtend. This version is also the one that enters the Eclipse release train number 2019-06, departing on time at June 19th.

More than 40 helping hands have made this Xtext release possible over the last quarter. A big shout-out especially to the first-time contributors! We are thankful for every reported issue, comment to a discussion, and proposed patch.

Even though the main focus was on stability and robustness, a couple of new features have been made available, too.

Xtend eventually learned to understand the ternary expression and got support for try-with-resources. While the former is just expressing a matter of taste, being able to efficiently deal with closable resources is a big win. Forgetting to close a stream or a connection is just a little harder when you can benefit from the compiler auto-closing the thing. This is also available in legacy scenarios where code is still required to run on ancient Java versions.

Both features were implemented by Eva Poell, intern for 6 weeks at our Berlin office. We are thankful for her great work!

When exploring a code base, software engineers navigate back and forth through the source, especially between references and declarations. If you want to take notes on the usage of a DSL concept, you can copy it directly from the “search results” page. Also, if you only want to deal with a subset of the results, it’s now possible to remove matches from the view.

The Xtext grammar editor received some love in this release cycle, too. The validation problems around invalid empty keywords can be automatically fixed from now on. Either a reasonable default is inserted, or the keyword is removed – it’s your call. 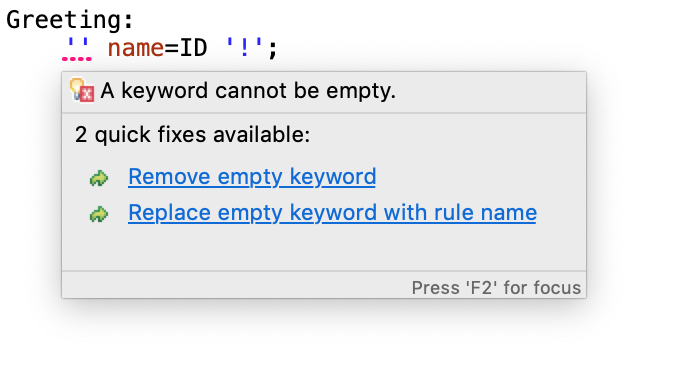 Long-running rename operations can now be cancelled by the user. Instead of waiting for the computation to finish and reverting the outcome, accidentally triggered renames are no longer a painful experience.

Talking about renames: Even though Xtend allows to define as many public types per file as you want, it is a common usage pattern to have a single top-level class per file. If names get out of sync because of a change of mind, a quick fix is offered to align the two of them. If you decide to rename the type, a proper rename operation is triggered, and all the references are updated along with the declaration.

The Xtext support for the Language Server Protocol has been improved in different areas. Extension implementations do now have access to the indexed resources, and the reporting of build results was fixed. Formerly, some notifications may have got lost such that the editors did not get any events about completed builds. The communication in the other direction was fixed, too. Sometimes the server did miss a couple of changed resources, thus its index information diverged from the code on disk.

A few rarely-occurring issues around the startup of Eclipse and the processing of deleted projects have been fixed. It did not happen often, but if you were bitten by that bug, it was rather annoying. These issues have been resolved.

The team is proud of the achievements in this release cycle. But we are also eager to know what your thoughts on this are. If you are missing a certain feature or do have suggestions how to improve Xtext or Xtend, just drop us a note and we are happy to discuss your ideas.